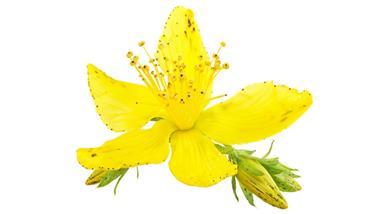 St. John’s wort (Hypericum perforatum) is named after St. John the Baptist, since it’s usually in full bloom by June 24, the saint’s feast day.1 The plant bears yellow flowers2 with petals that have black dots on their edges. It can stand 1 to 3 feet tall, and has multiple reddish stems3 and yellow-green leaves. Although primarily found in Europe, St. John’s wort can now be found growing in the U.S.,4 China, northern Africa, western and eastern Asia, Australia and New Zealand.5

The plant typically blooms during summertime, and can be seen growing in pastures and meadows.6 St. John’s wort also bears sticky fruits with three-chambered capsules7 that hold multiple small, black and pepper-like seeds8 with a resinous smell.

Under certain conditions, St. John’s wort may be helpful for your mental health if you’re feeling depressed — provided you aren’t currently taking prescription antidepressants, as the combination of the two could cause serious increases in your serotonin levels.9

Used alone and under the supervision of your health care provider, the herb contains compounds such as hypericin, hyperforin, flavonoids and flavonoid derivatives, xanthone derivatives, amentoflavone, biapigenin and volatile oils that may help combat depression.10,11

An analysis of 35 studies published in Systematic Reviews in 2016 revealed that St. John’s wort assisted in alleviating depression symptoms better than a placebo, and similarly to typical conventional drugs.12

Authors of a 1997 Pharmacopsychiatry animal study discovered that St. John’s wort extract may work like antidepressants by helping prevent reuptake of the neurotransmitters serotonin, dopamine and norepinephrine, and promoting positive effects in mice who were given the substance.13

This herb may also help address mental health problems such as anxiety or seasonal affective disorder (SAD),14 which normally occurs during the winter months because of a lack of sunlight. Aside from impacts toward your mental health, St. John’s wort may also help:

What Are St. John’s Wort’s Uses?

St. John’s wort was used to treat wounded soldiers during the Crusades,24 and drive out the “inner devil” in people during Medieval times. However, St. John’s wort’s history of medicinal use dates back to ancient Greece, where it was believed to possess “magical powers.”25 It was also recommended to be used against “depression, melancholy, and overexcitation”26 by Paracelsus, a Swiss man considered “the father of chemistry and the reformer of material medica” (among many other nicknames).27

The use of St. John’s wort is prevalent in some European countries, such as Germany, against mental health issues like depression.28 St. John’s wort can be found in other forms such as tinctures, oils or balms that may help promote healing of burns, wounds, insect bites and bruises.29 You may also encounter St. John’s wort products such as supplements30 and teas.31

St. John’s wort leaves and flowers can be used to make tea that may assist in:

How St. John’s Wort Oil Can Boost Your Health

Are you interested in trying St. John’s wort oil? Initial research has revealed that it possesses anti-inflammatory capabilities,36 and may help alleviate wounds and burns. Authors of a 2014 Planta Medica article noted that when used topically, St. John’s wort oil or tinctures may help relieve minor wounds and burns, sunburn, abrasions, bruises, contusions, ulcers and myalgia.37 It’s also possible to use this oil to help relieve cold sores and viral skin lesions.

If you plan on using this oil, consult a physician and take an allergen patch test to check for potential side effects. Dilute the essential oil with a carrier oil like sweet almond, olive, jojoba or coconut, or add it to other oil blends, since it can deliver a warm, balsamic, herbaceous and sweet scent. St. John’s wort oil blends well with citrus oils, peru balsam oil and ginger oil.38

Side Effects of St. John’s Wort

No matter what form of St. John’s wort you use, remember that it may lead to photosensitivity or sun sensitivity.39 If you’re using St. John’s wort, try to avoid the sun as much as possible, or use sunscreen or wear protective clothing. Some of the other side effects linked to St. John’s wort include:40

As mentioned, St. John’s wort has the tendency to interact with multiple drugs, as highlighted by PennState’s Milton S. Hershey Medical Center:

If you’re taking these drugs, refrain from using St. John’s wort with them since it may lead to other health issues. This herb can also reduce the drugs’ effectiveness.41